So my idea isn’t a ritual itself, but rather an item that facilitates such. Amulets and sigil magic has been a part of our civilization for thousands of years, and was part of pre Abrahamic religion functions. The most prevalent of them was Egypt, as the word amulet provokes the image of the wadjet, or eye of Horus so ingrained into our minds, or the ankh—a symbol of everlasting life. Today, you’re more often to see many people with a nazar or hamsa to ward of bad influence, and people wearing pentacles, crosses, crescents, and many more symbols that represent their faith—and that through their faith are protected. Horse shoes and clovers and other symbols for luck. In Asia, paper talismans are still made today for a plethora of intentions. 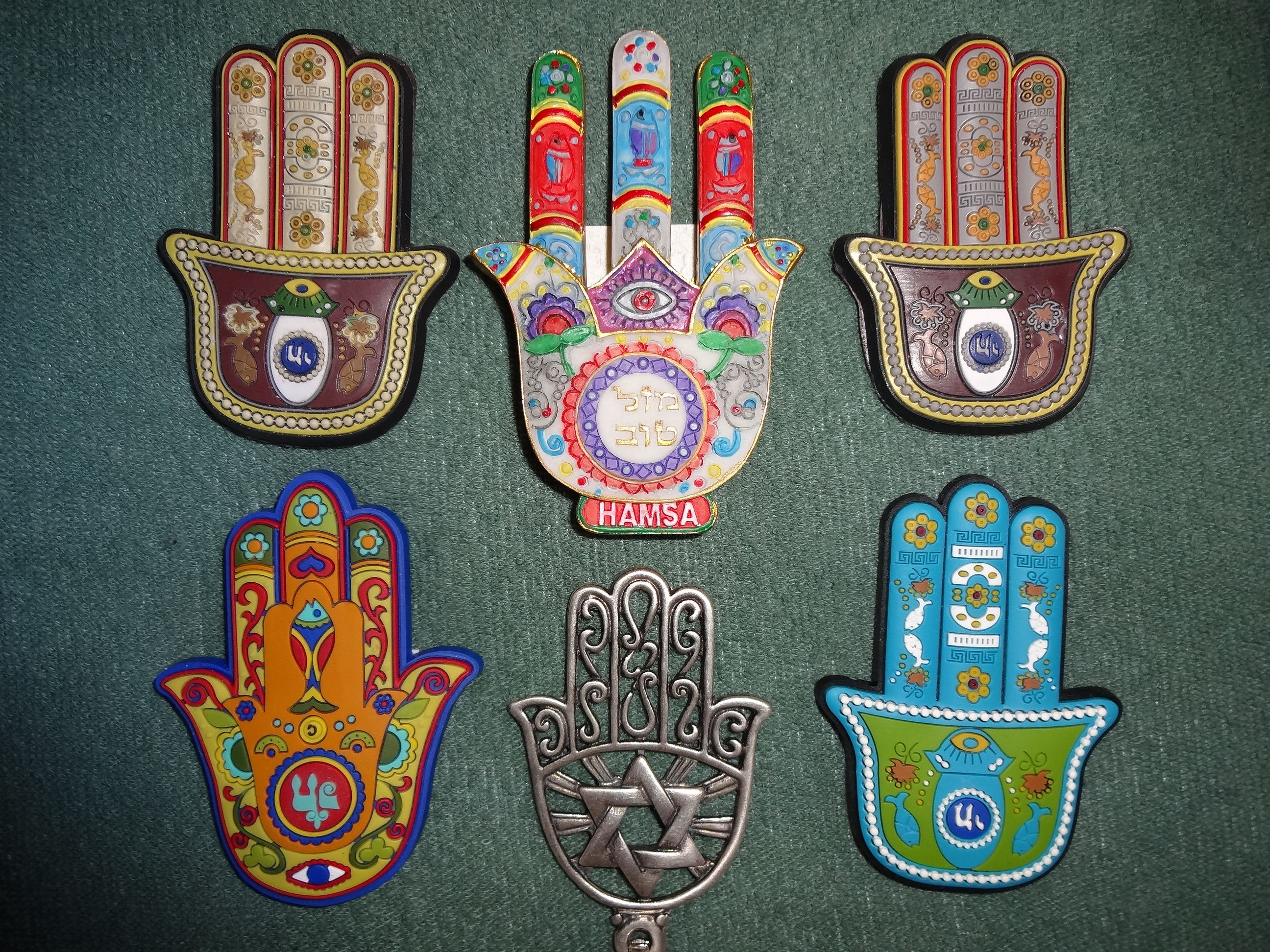 Hamsa from Israel. By Bluewind (Own work) [CC BY-SA 3.0], via Wikimedia Commons

Sigil magic itself is was one of earliest forms of sympathetic magic. From Paleolithic cave paintings (as some believe) to Nordic runes, to the veve of Voodoo. They are used to symbolize something, whether it be a being, or giving an abstract concept like an emotion or intention, a concrete form.

Modernly, there’s been the spiritual beliefof Chaos Magic, the use as magic as a tool. It takes inspiration from the many philosophies, science fiction, actual science and ceremonial systems from other known religious groups to create one’s practical and individualized ritual system and encourages the development one’s own original (or unorthodox) ways.  A sort of New Age bricolage or Sheilaism, that heavily encourage implementing technologies to create one’s on unique spiritual and technological experience. Sigil making also happens to be part of the practice, and each practitioner creating their own sigils unique to them.

Which leads me to my project.

First off, technomancy is pretty darn cool. People love it when you mix magic and tech, and Chaos Magic practitioners are the most likely to be the ones building devices like mine. Which isn’t too far out of a scope.

My board can be taken as an amulet, a personal altar, or gris-gris talisman they can wear and use with their practice. As Chaos Magic encourages individuality and creativity, I will design my own sigil system for the item, as the act of creating is consider a ritual in itself.

With all of them, I start with the asterisk, the six pointed star. This serves as a sort of multiplier of the intention. And then I look through other people’s symbols for inspiration. For this I had gone to Love, Creativity, and Wealth/Fortune—the most common of desires, and create a sigil from that. Due to time and parts allotted, I would only be able to create the one.

The digital aspect of this is my computer playing canvas to this. Originally such things were drawing in chalk, brick, ink, or many other physical medium.  Mine is vector images.  The meditation and intention is there, the act of drawing is a meditation to me, which amusing enough, many of my ideas seem to look very mandala like. Mandalas being artwork created as part of a meditative process—something I realized in an afterthought after creating my first board. You can read about the fabrication of the board HERE.

Wealth/Fortune: The asterisk is little hidden in this form, but there is a great cosmic multiplier. In the center is the alchemical symbol for gold, which is also the Sun. the square it frames takes form of a Chinese coin, often used for good luck charms. It sits atop a quatrefoil, which could also be interpreted as a four leaved clover and sealed with roundel, a heraldic element for prosperity. The asterisk, coin, and roundel also form a sort of ‘wheel of fortune’ shape as well.

Love: Love is simpler– and by that I mean the design, not the act itself! My asterisk multiplier, with triangles and eight pointed stars. Triangles are a symbol for love, but also in the sense of engineering a stable shape. So it is hope this relationship (whether it be platonic or romantic) is a healthy and stable one. The eight pointed star is a symbol associated with Ishtar, one of the oldest known love and fertility goddesses.

I didn’t want to go with hearts because it was too obvious. Also fun fact, the shape is believed to be the shape of the seed/fruit of a plant called silphium that became extinct due over-harvesting to it being a supposedly effective birth control. Makes you think, huh.

At any case, I etched the two boards, but were spectacular failure. I messed up the circuit, when I removed one of the LEDS and left the LED and the resistor each in parallel,  and kind of screwed it up. And I don’t have the parts to try again, unfortunately, since I thought we had 2 weeks instead of 1. But still I have to say, the translucent yellow of the double sides copper boards is kind of pretty.

I’m a little disappointed that it wasn’t a success like the first one all because of simple mistake, but I suppose fail hard, fail fast here.

This site uses Akismet to reduce spam. Learn how your comment data is processed.